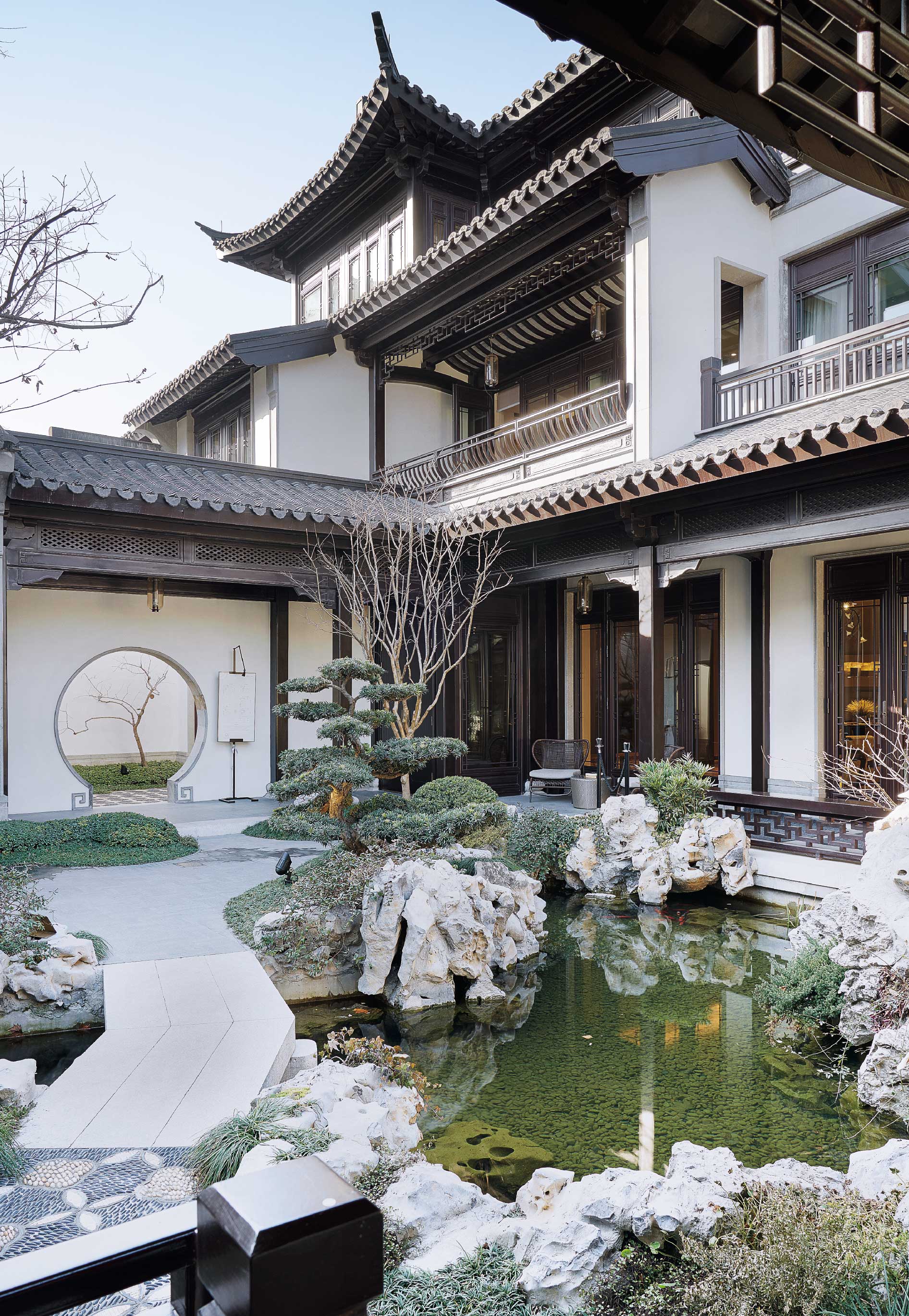 In a new residential complex in Hangzhou, China, modern architecture and ancient design stand side by side with a dramatic effect. One half of Phoenix House features a sleek, minimalist apartment block, while the other showcases a Ming-style temple design with its characteristic curved roofs (originally thought to confuse evil spirits). Both sides house an array of deluxe villas and suites, organized around several courtyard gardens, an exhibition hall and other shared spaces.

The interior décor also juxtaposes old and new. The furnishings and wallpapers use a contemporary European color palette – mostly soft, elegant whites and neutrals – but metallic finishes, like hand-carved trim painted in platinum leaf, add a distinctive Chinese flair. Highlights include rooms with traditional curved beams and extravagant chandeliers, as well as a beautiful abstract mobile that evokes a startled flock of birds. In the bathrooms, the INAX Satis shower toilet’s minimalist lines and luxurious array of features seem tailor-made to the opulent surroundings, equally well-matched to both the stylish geometric ceilings and the classic marble floors and counters.

Hangzhou’s West Lake district, a UNESCO World Cultural Heritage Site, has inspired poets and artists for more than a thousand years with its blend of picturesque islands, flowering trees, and temple architecture. Matthew Carlisle, whose London-based firm designed the show villas and communal areas of Phoenix House, used the historic setting as an inspiration. The pond garden, with its artful boulders, penjing trees, stone bridges and circular »moon gate,« is an homage to Hangzhou’s time-honored style of lakeside landscaping. The fundamental principle: to arrange disparate elements in perfect balance to create an idealized scene. It’s a formula which could serve equally well as the motto of the Phoenix complex itself.

The Phoenix House is half sleek, minimalist apartment block, while the other half showcases a Ming-style temple design. 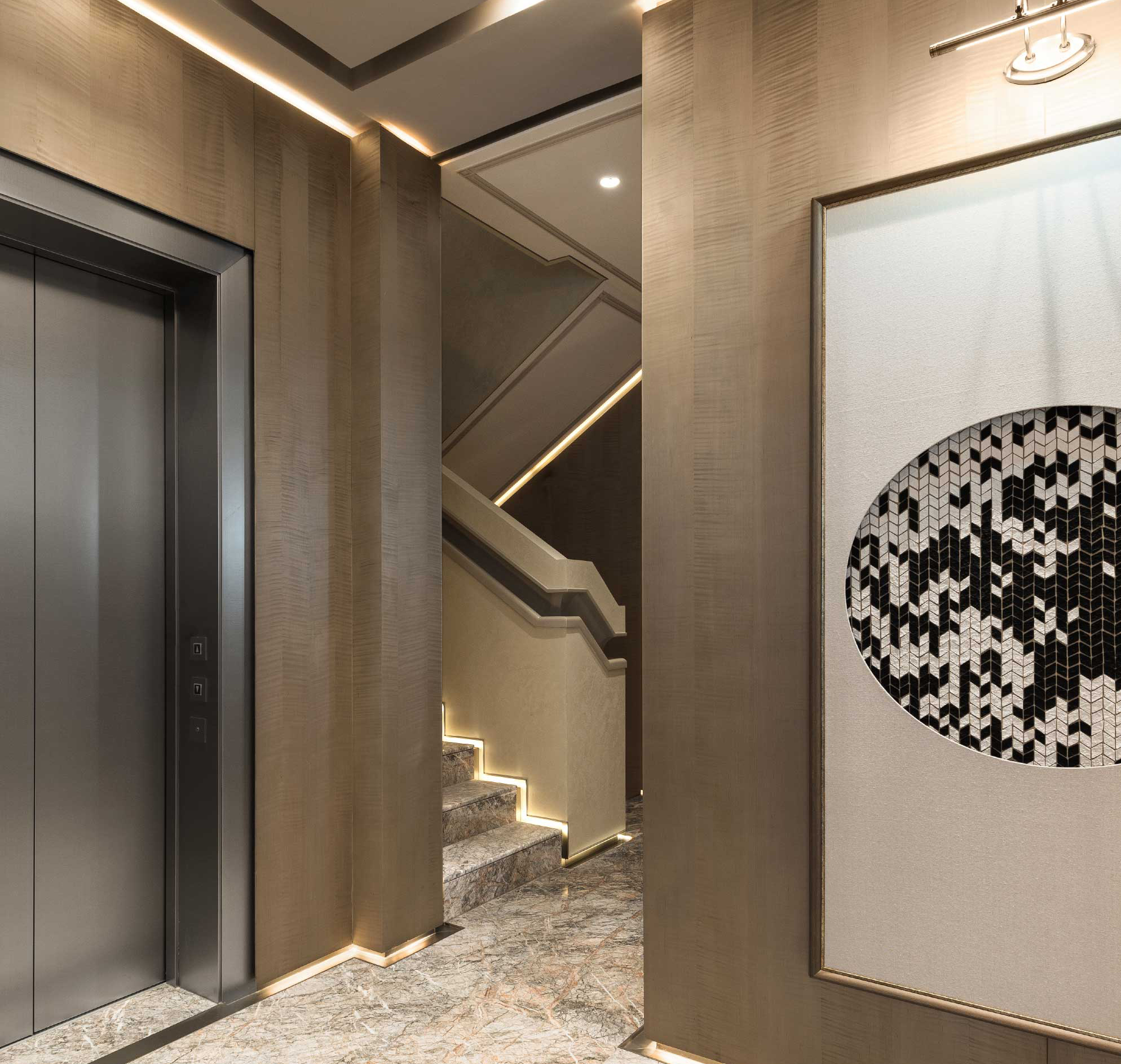 The Chinese often have extended family members living together, so the house had to be divided so that everyone has their own suite. 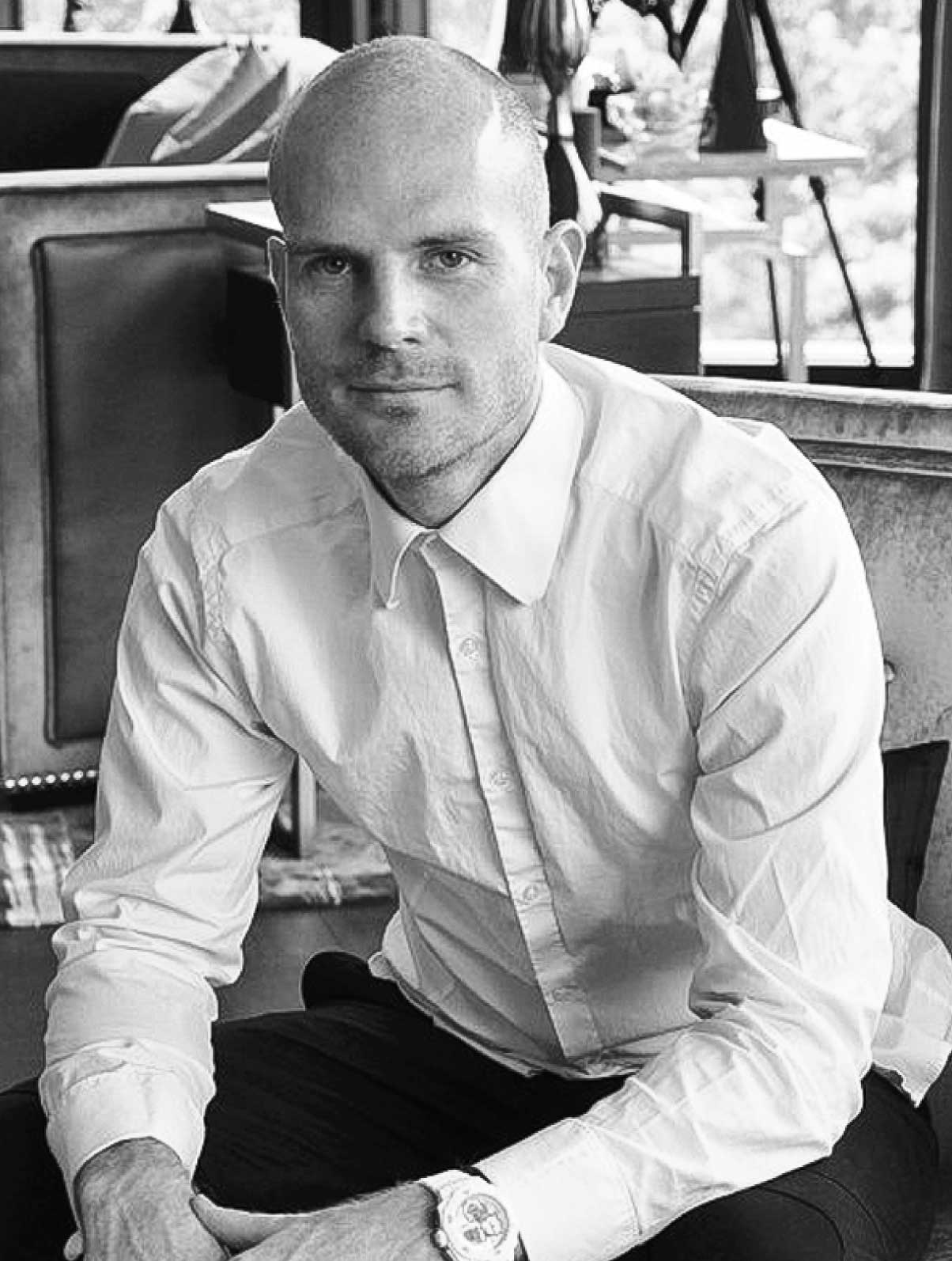 INAX Satis are beautiful objects that work with many different aesthetics.

You designed the flagship villas and the shared areas of the Phoenix property. What inspired you when creating the interiors?

This is our first project in Hangzhou, which is the cultural capital of China – a beautiful city, the »Golden City on the Lake.« It was an amazing opportunity for us to be inspired by the setting – just taking cues from the colors and architecture of the city as we walked around.

What are the unexpected aspects to designing for a different culture?

As a family unit, the Chinese often have extended family members living together – parents as well as grown children who possibly even have their own families. So, the house had to be divided so that everyone has their own suite, where they have their own privacy, but it still has that big, open-plan feeling – which is no easy feat, really. So, it was a great, challenging opportunity.

Did that approach translate into the design of the bathrooms?

Similarly, being open-plan and spacious was the key, but so was making sure that each bathroom was tailored slightly for the use of each suite, as it were. We made sure the furniture-ware was beautifully designed itself – that was a key feature.

How did the INAX shower toilets fit into that scheme?

Well, they’re beautiful objects in themselves, obviously, and they work with many different aesthetics. For a classic-modern mix, which is the flavor of the Phoenix villa, they work there, and they’re suitable for more contemporary areas such as a powder room or a cloakroom. So, we really felt that the range that they offered was right for this project. 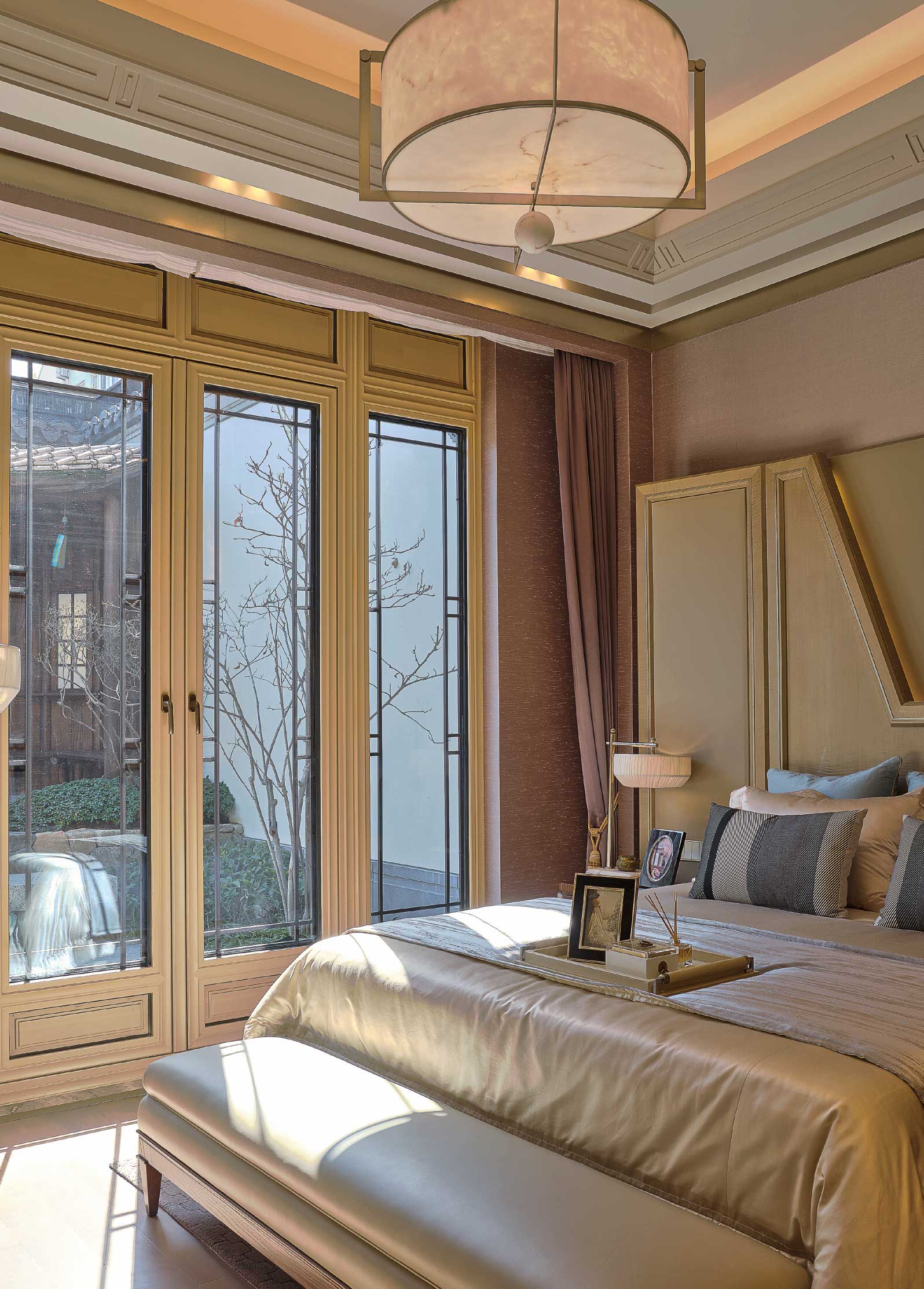 The furnishings and wallpapers use a contemporary European color palette with metallic finishes, like hand-carved trim painted in platinum leaf, for a distinctive Chinese flair. 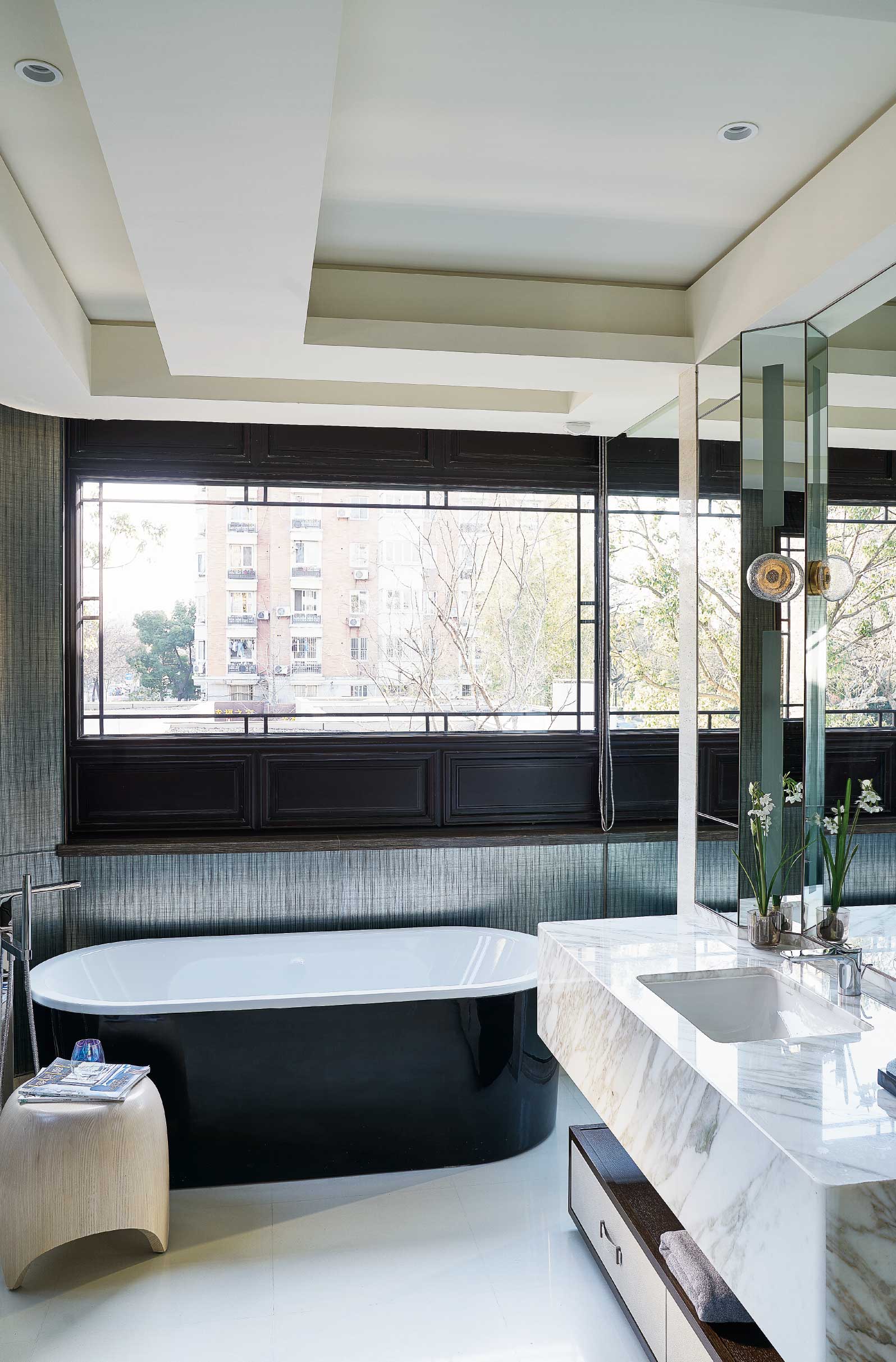